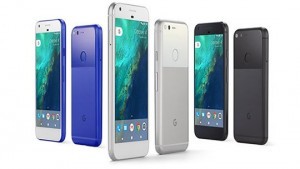 On October 4 2016, Google announced for the first time a family of products that brings people the best of Google through hardware and software made by Google. We’re excited that the lineup features the first phone made by Google inside and out — Pixel.

For those of you who have followed Google closely, that name may sound familiar to you because they’ve used the Pixel name in the past for consumer hardware products that represented an overall premium Google experience.

Many of you may also be familiar with the Nexus program. Since 2010, they’ve partnered closely with mobile handset partners around the world to bring you the best of Android. Through Nexus, the goal was to work with these various partners to push the boundaries of what’s possible with a smartphone. They’ve now decided to take the next step and provide their take on the best Google experience, by bringing hardware and software design together under one roof.

Introducing Pixel, a new phone by Google. It has the highest rated smartphone camera. Ever. A battery that lasts all day. Unlimited storage for all your photos and videos. And it’s the first phone with the Google Assistant built in.*

We found some specs on the blog released by Google:

Pixel is the first phone with the Google Assistant built in. With your Assistant, you can have a natural conversation with Google to find answers or get things done on the go. Say “Ok Google” or touch and hold the Home button and your Assistant is ready to help. Ask it for a brief update on your day or to play a video on YouTube. Look up traffic on the way home from work or when the nearest pharmacy closes. You can even say “show me my camping photos with Andrew” and it’ll instantly display the photos you’re looking for. Your Assistant can also offer help with what’s on-screen in any app. So if your friend texts you to meet up at a new restaurant, you can just say “navigate there”.

The best smartphone camera. Ever.

The Pixel camera is not only the best smartphone camera Google has ever made, it’s the highest rated smartphone camera anyone has ever made. Their DxOMark Mobile score of 89 is a great example of what’s possible when great hardware meets great software. Pixel puts cutting-edge computational photography in an ultra-fast and easy-to-use camera.

Pixel has a 12.3MP camera, featuring an f/2.0 aperture and big 1.55 micron pixels to capture lots and lots of light. Google’s team of photography gurus and image processing experts have spent the last year designing and tirelessly optimizing our entire camera stack.

Pixel’s camera lets you take stunning photos in low light, bright light or any light. Catch action shots as they happen with Smartburst, which takes a rapid-fire sequence of shots and automatically selects the best one. Use Lens Blur to achieve shallow depth of field and bokeh effects, making your subject pop. You can capture dramatic landscapes or make faces glow with new exposure controls.

And as a special bonus for Pixel owners, Google is including free unlimited storage for original quality photos and videos at full resolution in Google Photos.

Phones will get software and security updates as soon as they’re available, directly from Google. Google has also made the update process easier. When a new update is available, it can download and install in the background — no more waiting around for your phone to update.

The Pixel also comes with Google Duo and Allo pre-installed so you can video call and text with all your friends, whether they’re on Android or iOS.